A litttle bit of history on the Spanish Flag

The Spain flag colours are red and yellow. It is a brightly coloured flag which is easily identifiable. All over Spain you will find the Spanish Flag flapping in the wind high in the sky against the scudding blue sky and the bright sun.

The red and yellow Spanish Flag was adopted by the Spanish Constitution in 1978. The Flag is designed of three horizontal stripes of red, yellow and red.

As to the origin and history of The Spanish Flag, in 1785, Charles III – the monarch of Spain – chose a flag that is comparable to the flag flown today. It was important that Spain adopted a new flag to distinguish themselves from the other kingdoms, red and yellow were selected as the chosen colours.

However, the country altered this design in 1931. At the time of the Spanish State, the flag was altered to comprise a band of purple along with the red and yellow. Though, it was not long before the colour purple was detached in 1936.

Numerous changes have been applied to the Spanish flag throughout its history, mainly to update the Spanish coat of arms. The current Spanish Flag that remains in use today was recognised in the Spanish Constitution in 1981.

A Symbol of national pride

The flag of Spain is a symbol of national pride and rich history of the country. It holds immense significance, and its history is shrouded in legend.

There are stipulations which state that the flag can only be flown horizontally from public buildings, private homes, businesses, ships, town squares, or during official ceremonies. It is usual that the flag should be flown from sunrise to sunset, government offices in Spain and abroad must fly the flag on a 24-hour basis (during the night, and in poor light, it must be properly lit). The flags must conform to the legal standards and cannot be soiled or damaged in any way.

During periods of mourning, the flag can be flown in either of the following ways:

The first method, known as half masking, is performed when the flag is hoisted to the top of the flagpole, then lowered to the pole’s one-third position.

The other method is to attach a black ribbon to a flag that is permanently affixed to a staff.

During the funeral ceremony, the flag may be used to cover the coffins of government officials, soldiers and persons designated by an act of the President; these flags are later folded and presented to the next of kin before interment.

When flying the Spanish flag with other flags, the following is the correct order of precedence: the national flag, flags of foreign states, the flag of Europe, international NGOs, military and government standards, autonomous communities flags, city flags and any others. When foreign flags are used alongside the Spanish flag, the flags are sorted according to their countries’ names alphabetically in the Spanish language. The only exception is when the congress or meeting held in Spain dictates a different language to be used for sorting. The flag of Europe has been hoisted since Spain became a member of the Union. While not mentioned by name in the law, the flag of NATO can be used in Spain, since it belongs to that organization as well.

When unfurled in the presence of other flags, the national flag must not have smaller dimensions and must be situated in a prominent, honourable place, according to the relevant protocol.

What is for sure is that the red and yellow flag is the symbol of Spain and flown with the nations pride. 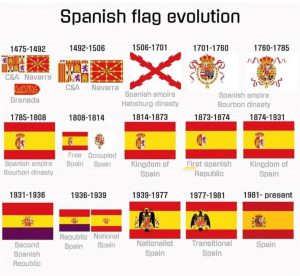