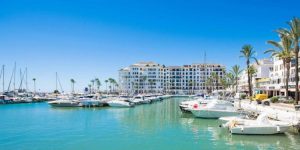 Manilva is a municipality that lies on the coast at the southwest edge of the province of Malaga on its border with the province of Cadiz and is growing in popularity amongst British buyers due to the amazingly low cost of the properties here.

There are around 17,000 full-time residents in the town of Manilva, and a further 14,000 who reside there on a temporary basis or have holiday homes. Yet, with a growing number of ex-pats in the area, Manilva remains intrinsically Spanish – and there isn’t a skyscraper in sight.

Since the construction of the marina and golf course in Manilva, tourism has boomed and has since been given the status of one of the Costa del Sol’s fastest developing municipalities, with the resident population almost trebling in the last 10 years.

Another area of development has been the business sector, with the establishment of an industrial estate just a few hundred metres from the Manilva exit to the A7 motorway. There are also literally hundreds of shops and office units available thanks to this construction boom for you to enjoy in which you couldn’t do before. In Manilva, you’ll find an array of communities, from the yachting marina of Puerto Duquesa to the small fishing hamlet called Castillo de la Duquesa, which is named after the castle.

Manilva has a fascinating history dating back to Roman times, and there are still some remarkably well-preserved Roman sulphur baths. The Paris Church of Holy Ana, known to be the most important religious monument in Manilva, is also well worth a visit too.

Interestingly, Manilva has a very busy calendar of ferias and fiestas either religious, traditional or modern. Kicking off the year you have the Three Kings cavalcade on 5th January, followed by the Manilva International Festival, which shows off its varying culture, cuisine and traditions towards the end of May. Rounding off the summer the first weekend of September, you have the Vendimia, a festival which celebrates Manilva’s grape harvest…… perfect for you wine lovers out there!

In terms of the property market, prices remain respectable whatever your budget despite. A one-bedroom beach apartment will set you back just over €100,000, whereas you can buy a townhouse in a quiet urbanization for just over €160,000 – yet still only be minutes away from the nearby beach and bars. If you’re looking for a touch of the high-life, a detached-villa will cost you around €480,000.