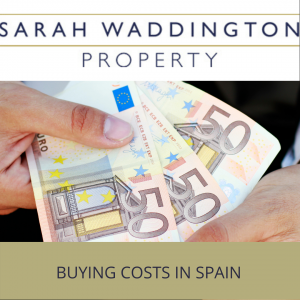 Spain suffered significantly during the global financial crisis and the ensuing property market crash. House prices dropped by as much as 40%, but in recent years, the market has become more stable despite Brexit and all the currency ups and downs that we have encountered.

Prices in Spain have been rising steadily since 2016, and although the COVID-19 outbreak has affected the market in 2021, official government figures show average prices growing.

Buying costs in Spain are relatively high. Therefore, when you are calculating your budget you need to allow at least 10% to cover the taxes and fees for which the buyer is responsible.

This will include property transfer tax, legal fees, notary and registry fees.

However, it’s best to think about 10% as the minimum.  Depending on the region it could be as much as 3% higher because the property transfer tax is set by autonomous regions, not by the central government.

In Andalucía they operate a sliding scale between 8% and 10%. The price bands are as follows:

At present we have a reduction in transfer tax to 7% on all price brackets due to the pandemic valid until the end of 2021 talk to us about saving money and benefiting from this reduction.

Stamp duty is paid on new properties but it is regionally variable.  For example, in Andalucía it is currently 1.2%.  In contrast, it is 1.5% in the Costa Blanca region.  However, IVA (VAT) is also payable for new property and that is 10% on residential properties across the country, with the exception of the Canary Islands. There the ICIG applies and it is 7% on new property.

Meanwhile, IVA rises to 21% in respect of commercial properties and plots of land.

One other cost that will increase the estimated 10% by perhaps another 3%, is the extra charges that apply when you take out a mortgage.  One way this amount can be reduced is to take over an existing mortgage if there is one although it won’t get rid of it altogether it will reduce it.  Assuming the previous owner’s mortgage is common practice in Spain although it is not a foregone conclusion.  In addition, the bank reserves the right to renegotiate the terms.

Check out the Buying Process in Spain here